We all know that first impressions do matter. And if your home is truly to be an extension of you and yours, it must make a memorable and hospitable introduction. Yet many who build or renovate homes, having already poured heart, soul, and perhaps buckets of money into their projects, fail to consider the many elements that enable their homes to greet guests as well as family members. First and foremost, it's wise to remember that the passage from public to private space does not begin at your front door, but rather at curbside or your property line. "The general premise in landscaping is to make the front door the focal point," says garden designer and horticulturist Dean Rossman of Roslyn Harbor, New York. "But you have to start first with something street-side, such as a lantern, hedge, or fence that denotes that the visitor has arrived." 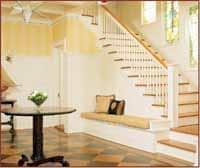 Rossman is particularly fond of cottage garden entries-those with a street gate topped with an arbor. "They signal that you are somewhere special and intriguing and that there is more to discover inside. It's also a place to linger and chat when guests depart or neighbors drop by."

From the periphery of the property, you want to draw the eye forward, according to Rossman. There are many ways to do this, including planting shrubs or flowers "of diminishing size to create a trompe l'oeil effect," he says, or by creating "destinations along the way with plants in containers." Path lights provide safer journeys at night and can enhance the approach to the house. "However, they should not make the walkway look like an airstrip," he says. Illumination is important to Rossman. "Even something as simple as a porch light can look inviting," he says.

Near the front door Rossman favors "beds that step out and down to the door. And the beds flanking the front door are like welcoming arms." In these beds Rossman cautions against planting something that will grow too large. "Because you've tended it over time, you'll have a hard time parting with it," he says. 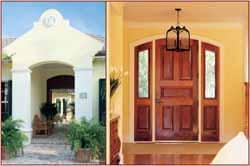 The area just outside the front door is the transition zone, where "the flavor of the house can be highlighted or the interior's theme carried outside. For example, if you have an Oriental-style decor you might use bamboo planters on the porch," Rossman says. He adds that window boxes will add color and character to the entry of any traditional house. He also likes a tracery of vines, such as Virginia creeper, worked into the front door frame. "You can also train a pine or small tree, like blue weeping cedar, fastened to the eave of the house to create a draped effect over the doorway." He says birds will nest here, a good-luck sign in many cultures. "With any exterior entry you are trying to create a sense of place," he says. "Underscore what is unique about the house and property. Try to achieve a melding of regional influences, native plants, the architecture of the house, and the personalities of the people who live there."

"Entryways are expressed as both exterior and interior spaces. My brain goes to the outside first," says architect Steven Brisson, AIA, of Naples, Florida, "to the architecture of the structure." Brisson says this structure needs to marry well with the inside. And whatever is going on in the rest of house should be distilled and its essence expressed in the entryway. He says this can be accomplished with scale, choice of materials, level of refinement, complexity of design, or any combination of such. "Even a modest home can be improved by emphasizing the best of its elements in an entryway." 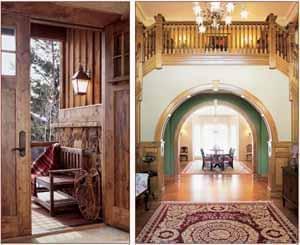 "Interior entries are places to take a chance, to be dramatic," says interior decorator Barbara Southerland of New York City and Greenville, North Carolina. If, for example, you like green and use it elsewhere in the house, you might choose a bright green chartreuse paint for the foyer, she says. Southerland's penchant for surprise even extends to the hall coat closet's interior, which she suggests painting in contrasting, vivid hue. "It's a great surprise for guests," she says. Additionally, she proposes installing in the closet a reeded brass pole. "It costs only nominally more and really makes a nice impression," she adds.

Keep furnishings and accessories to a minimum, she advises. A chair or bench where one can remove boots and shoes, and to rest packages, however, is an absolute requirement. "I also like a mirror in entries," she says. "You can sneak a peek as you're going out the door. Mirrors also provide some glitter, which is nice because foyers often lack natural light." Southerland also prefers a small table or chest that is "interesting and eye-catching." Placing a lamp on top provides a "secondary light source which warms an entry and makes it look inviting." Also on the table or chest Southerland usually places an interesting woven basket, a brass bowl, or a silver tray.

Entry walls are wonderful places to display art, says Southerland. Just be sure to illuminate pieces well. She also loves to hang decorative brackets in foyers. "You can place pieces of porcelain or other objects high and safely out of the way. And when entertaining, you can put vases of fresh flowers on the brackets." Southerland also notes that brackets provide an opportunity to rotate pieces in a way you can't do with pictures because of the nail holes.

Her foolproof decorating formula or traditional entries: Position table or chest. Hang bull's-eye mirror above. Over the mirror, hang a painting. To either side of this arrangement mount brackets or candle sconces. "This works in most spaces," Southerland says. She also recommends placing a plant in an entry to provide a transition from the outdoors to in. "I like a small palm on a stand if you have room for it." Lastly, she adds, "Don't forget about door hardware. Spend the extra money for quality. Like jewelry, it will show."

Getting Ready to Build